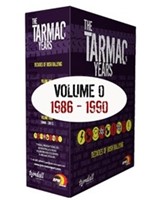 RPM has three exciting new products for your stocking this Christmas.

HEROES OF THE HILLS. An 80 page record of the winners of the Donegal International Rally.

Broadcaster and journalist Alan (Plum) Tyndall and acclaimed photographer Dr. Esler Crawford have compiled a record in words and pictures of all the winners of the Donegal International Rally.

From Cathal Curley (1972, 1973, 1974) to Manus Kelly (2016, 2017, 2018), there have been twenty-three different winners and top of that list comes the six-time achiever Andrew Nesbitt, who is featured on the cover. We have also seen three World Rally Champions in ‘The Hills’ – Ari Vatanen and Sebastien Loeb came to win and did and Colin McRae who came along just for the craig.

Mouton’s Monster Audi – the Rothman’s Porsches – GM Team disorders – the Coleman/MacHale clashes, are just three of the headline stories from the 1985 Irish Tarmac Rally Championship season that are captured in the final DVD in RPM’s Tarmac Review Series.

This was right in the heart of a golden age in Irish rallying when unprecedented crowds flocked to the hedgerows to see the Group B supercars in action.

And those headlines – Mouton’s Monster Audi? The bustle in Belfast that year was to catch a glimpse of the lovely French ladies Michelle Mouton and Fabrizia Pons, and their Audi Sport E2, the most monstrous of all those 4WD projectiles.

The Rothmans Porsches? The raucous roar of the 911’s were a joy to listen to and behold in their blue red and gold striped colours with Billy Coleman and the multiple French champion Bernard Beguine at their helm.

The GM Dealer Team disorders? Jimmy McRae and Russell Brookes were team mates but not friends, especially when Russell was ordered to back off and give Jimmy his fourth Circuit win.

The Coleman/MacHale clashes? The friction between Billy Coleman and Austin MacHale lasted all season. Billy won in Donegal and Killarney but 1985 was Austin MacHale, Christie Farrell and the Irish Shell Opel Manta 400’s year.

RPM is grateful to RTE, UTV, Alastair Millar, John Agnew and others for the additional footage used in this DVD. Note the quality of some material may fall below RPM’s normal production standards but has been included because of its historical interest.