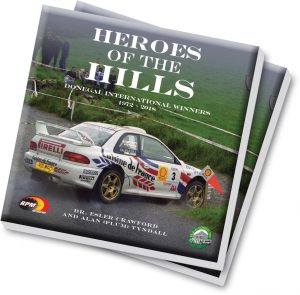 Broadcaster and journalist Alan (Plum) Tyndall and Ireland’s acclaimed photographer Dr. Esler Crawford who have been enthusiastic followers of the Donegal Rally since its inception have combined to put into words and pictures, a record of the winners in the rally’s forty-six year history.

From Cathal Curley (1972) to Manus Kelly (2018) there have been twenty-three drivers have triumphed and top of that list comes Andrew Nesbitt, a six time winner, who is featured on the cover. We have also seen three World Rally Champions in ‘The Hills’ – Ari Vatanen and Sebastien Loeb who came to win and did and Colin McRae who came along just for the craig.

‘Heroes of the Hills’ will be on sale for £15 (€19) during the rally weekend and online on www.rpm-motorsport.com from 21st. June.