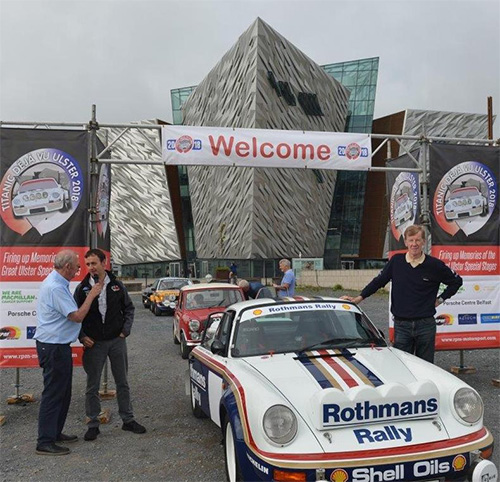 That just about sums up Titanic Déjà Vu Ulster 2018 where Walter Rohrl and Paddy Hopkirk led a cavalcade of 115 cars through the Antrim stages. 300 guests smiled at the gala dinner in Titanic Belfast and listened in awe to what a twice World Rally Champion had to say. Over £10,000 was raised for Macmillan Cancer Support and Cancer Fund for Children.

“We will know the exact charity pot when we have gathered in all the money and paid all the bills but we know that those that enjoyed our event gave generously to the benefit of our two excellent causes,” said Dr. Beatty Crawford and Plum Tyndall who run the Déjà Vu events.

Titanic Déjà Vu Ulster took off from the moment the registrants entered the fabulous Porsche Centre in the Titanic Quarter on Friday evening and the mood at the happy rally reunion which brought together so many old friends and such beautiful machinery, lasted till the last guest left Titanic Belfast in the early hours of Sunday morning.

A stroll through Parc Fermé provided enthusiasts with an open air rally museum. There was John Mulholland’s glorious Porsche 911 SC in it’s Rothmans colours, still with Billy Coleman and Ronan Morgan’s names on its flanks from its Killarney Déjà Vu outing in 2017.

This time however it would have a former works Porsche driver behind the wheel and a gauge of the its owners extraordinary enthusiasm is that John donated a considerable sum to the cancer charities to allowed him to sit beside Walter Rohrl in his own car!

Paddy Hopkirk has graced virtually every Déjà Vu event and there sat 33 EJB, the perfect replica of the Mini Cooper S that brought Paddy his 1964 Monte Carlo win. On this occasion Rory Kennedy, the Donegal man who is used to sitting with legends would be accompanying him.

Further down the line Robert Dixon had brought along his Hopkirk Mini replica, the famous seamless one, but the person in the passenger seat was no replica, as there sat the real thing – Terry Harryman, the man who accompanied Paddy on so many of his Irish victories.

They were unloading the PJ Leahey’s glorious ex-Russell Brooks Lotus Sunbeam for the Ladies World Rally Champion Louise Aiken-Walker to drive, and John Taylor would step back into a Mk II Escort in the Haynes of Maidstone colours supplied by Seamus O’Connell and similar to the one that he used to win the first Irish Tarmac Rally Championship.

You were stepping back in history everywhere you looked. Cathal Curley, the first Ulster winner was enjoying a run in a modern Mustang, and Derek Boyd was back in a Porsche 911, the type of car that he had used to win the Ulster in its second year.

John Haugland had come from Norway to reminisce on his Circuit and Ulster outings in Skodas. Davy Greer turned up in a rare Ford RS200 and there were Manta 400s and Metro 6R4s, to remind us of the spectacular Group B days.

Rosemary Smith, the first lady of Irish motorsport, was reunited with a Sunbeam Tiger thanks to Andy Hennessey’s generosity. Andy had brought three cars, a glorious Fiat 131 for himself, and a Sunbeam Rapier that reminded us of Paddy Hopkirk’s 1961 and 1962 Circuit of Ireland wins.

As they rolled through the start arch with Titanic Belfast in the background we counted a collection of fabulous Group 4 Escorts, a line of Minis, a BMW 2002 Turbo and a host of Porsches.

Déjà Vu’s moto is ‘if it’s got four wheels and your proud of it, bring it along’, and in McBrides in Cushendunn those that could get space in the cosy pub discussed past glories and talked about their pride and joys over a bowl of chowder.

There were cheers at the hairpins on Torr Head and more stories to be told as the Belfast Gospel processed down the famed Titanic staircase to open a memorable finale.

But as all the memories from Titanic Déjà Vu Ulster 2018 sink in, the greatest must be when they met Walter Rohrl, one of the greatest rally drivers of all time and heard him talk about his extraordinary career.

“World Championships meant nothing to me, championships have to be manipulated. All I ever wanted to do was win the Monte Carlo Rally, and I did it four times in four different cars.”

Walter has only been in Ulster twice and both of those occasions have been utterly memorable!