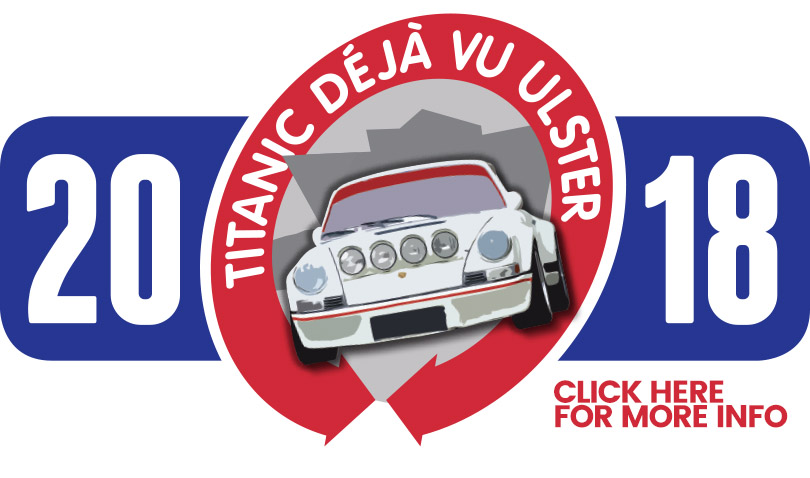 “The Forgotten,” the co-drivers whose lot is often not a happy one, are coming in their numbers to the great Déjà vu re-union.

Co-driving has evolved from primarily reading a map while being driven a high speeds, often in the middle of the night, without becoming sick to reading pace notes at much higher speeds. Do well and don’t make a mistake and co-drivers have to live in the shadow of their drivers victory. Call a wrong pace note or make a map reading or timing error and the whole world will know about it.

On the other hand co-drivers have the incredible satisfaction and pleasure of vicariously enjoying great drivers doing something that most of us are unable to do. Here are some of the famous co-drivers who will be navigating In Titanic Déja Vu Ulster.

Dr. Beatty Crawford won the 1971 Circuit of Ireland and was second in the Manx Rally with Adrian Boyd in an Escort Twin Cam. Soon afterwards he went to America and stayed for 35 years. He never lost his passion for rallying and when Historic Rallying took off he bought his own Porsche 911 and had Stig Blomqvist, Jimmy McRae, Sandro Munari Walter Rohrl and Bjorn Waldegard drive. Together they had many successes including winning the Ypres 24 hours and RAC Historic Rally twice. It was Beatty who came up with the idea of Déjà vu events to make money for charity.

Dr. Esler Crawford Bsc. Ph.D. is perhaps better known as one of the finest motorsport photographers in the world. He was also one of the top rally navigators in the 60s, twice becoming Ulster Rally Championship navigator with Robert McBurney. He won the 1963 Circuit of Ireland with Ian Woodside in an MG Midget. He has also navigated for Cathal Curley and Robert Woodside. Esler was awarded the prestigious Contribution to Motorsport Award In recognition of his services to Irish motorsport.

Terry Harryman was a professional co-driver who won the Circuit of Ireland with Ronnie McCartney in 1964 and with Paddy Hopkirk in 1965 and 1967 in Mini Coopers. Terry went on to navigate for Tony Pond, Malcolm Wilson, Michelle Mouton and Ari Vatanen. He won the Monte Carlo Rally with Vatanen and numerous other WRC events. He miraculously survived an almost fatal crash with Ari on the Argentine World Rally in 1985. He will be co-driving for Robert Dickson, who represented the winning NI autotest team on numerous occasions against the rest of the Britain and Ireland.

Michael “Bones” O’Connor is sevens time Irish Night Rally Champion. A Corkman, he has won his local event, the 1000 Shakes Rally, thirteen times with seven different navigators. In Killarney’s Historic Rally of the Lakes, he partnered Brian Powley and Geoff Crabtree to victory. In 1984, Bones was the 1st Irish driver to compete in 1000 Lakes Rally in Finland. Wearing his other hat he was Clerk of the Course of West Cork Rally 1978 – 1990. Having moved to Perth, Australia in 2011, he recently returned to live on the Ring of Kerry. Bones will be re-united with Brian Powley in Adrian Kermode’s Porsche Carrera RSR.

Phil Short won the Circuit of Ireland with Jack Tordoff in a Porsche 911 in 1973 and twice with Dai Llewellin in 1986 and 1990 in an MG Metro 6R4 and Toyota Celica GT-4 respectively. He is no stranger to Ulster and won the Ulster Rally with John Taylor in 1978 and with Dai in 1990. He also co-drove for 3 World Champions – Bjorn Waldegard, Hannu Mikkola & Walter Rohrl. Phil successfully transferred into team management, with 77 WRC victories with Audi, Toyota, Mitsubishi and Ford’s M-Sport. He is still involved in WRC, being the Sporting Supervisor for the FIA’s Junior WRC programme, which brings budding young stars into the top level of rallying.

Derek Smyth is another experienced co-driver and has sat in the hot seat with both Ronnie and Dessie McCartney, Brian Nelson, Bertie Fisher, Sean Campbell and Dr. Dessie Nutt. Twice Northern Ireland Navigator Champion in 1976 and 1978, and in 1976 was BP Irish National Navigator Champion as well, the only Ulster navigator to clinch that series. He finished second in the 1978 Donegal International with Ronnie McCartney, and fourth on the Manx with Brian Nelson in 1976. An engineering graduate of Queen’s University Belfast he spent many years in Spain, USA and Switzerland before returning home to Northern Ireland 5 years ago.

Mike Wood was long time co-driver for Tony Fall in the all winning BMC Mini Cooper team. They won the 1964 Scottish Rally in a Mini and the 1971 Welsh International In a Datsun 240Z. Mike also navigated for many of the top rally drivers in the world. Timo Makinen, Tony Pond, Hannu Mikkola with whom he won the Austrian Alpine Rally in a Ford Escort Twin Cam, Simo Lampinen, Rauno Altonen and Gerard Larousse He will navigate Ernie Campbell in Ernie’s Mini in which Mike and John Wadsworth finished 20th in the 1964 Marathon de la Route, a truly remarkable feat