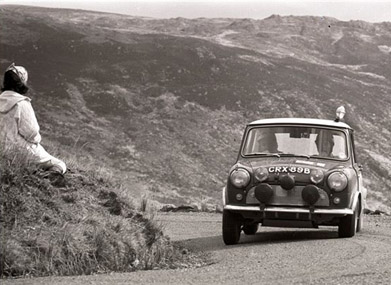 Five times Circuit of Ireland Rally winner, Paddy Hopkirk, has confirmed that he will be returning to his native Belfast to take part in Titanic Déjà Vu Ulster on August 31/Sept 1st.

It was back in 1958 when Paddy and Jack Scott took their Triumph TR3 to Paddy’s first Circuit victory, and he and Jack won again in 1961 and ‘62 in a works Sunbeam Rapier.

Paddy established himself as one of the fastest Mini drivers in the world when he and Henry Liddon won the 1964 Monte Carlo Rally and Paddy will drive an exact replica of the famous Monte winning Mini 33EJB, which was built by the late Graham McConnell in Donaghadee on the Titanic Déjà Vu Ulster event.

Paddy with co-driver Terry Harryman from Bangor, took the little Cooper S bombshell to his fourth Circuit victory one year later and they repeated the feat in 1967 to win the Circuit for the fifth time.

But it wasn’t always plain sailing as he and Terry had a narrow escape when they rolled their ‘seamless’ Mini into a ball on the Lough Eske special stage during the 1966 event. This serious accident convinced the team to introduce roll cages, which are an essential safety item in all rally cars today. 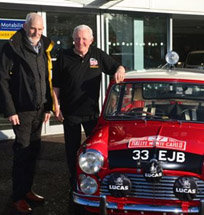 REGISTRATION
Registrations and Gala Dinner tickets can be reserved and paid for online at rpm-motorsport.com

DESIGNATED CHARITY
All profits will go to MacMillan Cancer Support