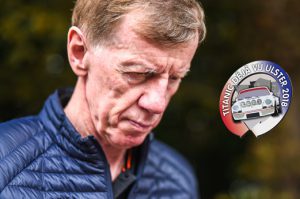 Walter Röhrl, the German driver voted ‘Rally Driver of the Millennium’ and called ‘A Genius on Wheels’ by Niki Lauda, will return to the scene of his dominant win in the 1984 Ulster International Rally.

The occasion is TITANIC ULSTER Déjà Vu, another of Déjà Vu Motorsport’s popular rally reunions in aid of charity which have already raised £70,000.

It’s thirty-four years since Walter and his co-driver Christian Geistdörfer blasted their Group B Audi Quattro S4 over the Antrim, Down and Fermanagh stages to obliterate the opposition. Those who witnessed their performance rate it as one of the greatest drives in Irish rallying history when Walter and Christian defeated Russell Brookes, Jimmy McRae and Bertie Fisher by over four minutes.

The Porsche contracted driver will return to Ulster to head a cavalcade of historic rally cars over famous Antrim stages such as Glen Dunn and Torr Head on Saturday 1st. September. That evening in Titanic Belfast he will be joined by many of his contemporaries and a host of other rally stars at a gala dinner.

“I’ll never forget co-driving Walter in my Historic Porsche 911 on the 1994 RAC Britannia Rally, so I’m delighted that he has agreed to headline our event”, said Dr. Beatty Crawford, joint organiser with Alan (Plum) Tyndall in Déjà Vu Motorsport. 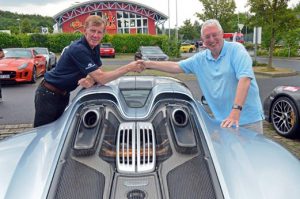 Walter Röhrl and Dr. Beatty Crawford after a lap of the Nurburgring in a Porsche supercar.

BIG WEEKEND
The outline format of the two-day event, based in Belfast’s Titanic Quarter is: